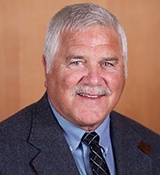 Bruce Blackstone, MD, founder of Longview Orthopedic Associates, has announced that he will retire at the end of May after serving area patients for 32 years.

Blackstone grew up in Longview and attended R.A. Long High School. He earned a B.A. in human biology at Stanford University where he was an offensive lineman on the varsity football team. He was named to the Academic All-American Team in 1973.

"Longview presented an opportunity to start a private practice in a location close to family and long-time friends," Blackstone said. "The private practice medical community was thriving, as were the two hospitals in town. I was attracted to the idea of living in a medium-size community in the Pacific Northwest where I had become accustomed to the many and varied outdoor recreational opportunities."

In 2007, he was among the first group of orthopedists in the country to earn subspecialty certification in sports medicine from the American Board of Orthopaedic Surgery. But what he is most proud of is the regionally respected group of orthopedic surgeons he’s worked with at Longview Orthopedics throughout his career.

"The continued success of our group in setting the course for rapid and major changes in the medical landscape speaks well for the quality and dedication of the surgeons at LOA," he said. "I’m proud to entrust the care of my patients to my partners at Longview Orthopedic Associates."

Blackstone said he is looking forward to a less structured schedule that includes some traveling and a great deal of fishing.

"Longview and the practice of medicine have both changed significantly, but my love for the area and my attachments to friends and family remain," Blackstone said. "I want to thank my colleagues, the dedicated staff at LOA, and my patients for 32 very fulfilling years."