Carpal tunnel syndrome develops when a large nerve – the median nerve – is compressed inside your wrist. This nerve controls feeling in your thumb, index finger and thumb side of the ring finger. The median nerve also controls the muscles at the base of your thumb. The condition gets its name from the eight carpal bones that surround the median nerve in your wrist, forming a tunnel to your hand. 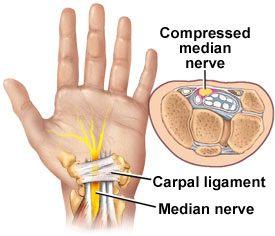 The tunnel is just big enough for the median nerve and several tendons to run through it. Anything that makes the tunnel smaller (such as arthritis) or makes the tendons larger (such as thickening of the tendon linings) can cut off the circulation to the nerve. When this happens, you notice pain, numbness and tingling in your fingers.

Pressure on the median nerve can be caused by

Symptoms of carpal tunnel syndrome usually improve or go away when these underlying medical conditions are treated – or in the case of pregnancy, after the baby is born.

In many cases, the syndrome has no specific cause – in spite of the widespread belief that everyone in the work force is at risk. Jobs that require you to grip something repeatedly and forcefully or hold your fingers or wrists in an abnormal position may contribute to the condition in some people, but studies seeking to find a cause-and-effect relationship are inconclusive.

What increases your risk?

How common is carpal tunnel syndrome?

Left untreated, carpal tunnel syndrome can lead to irreversible nerve and muscle damage. Fortunately, permanent nerve damage usually can be avoided if you’re diagnosed and treated early. Among people with a clear diagnosis of carpal tunnel syndrome, treatment relieves most of the pain, tingling and numbness. On the other hand, many people treated for carpal tunnel syndrome report persistent problems, and a few say their hands never get back to normal.

Carpal tunnel syndrome usually develops gradually. Pressure on the median nerve produces a specific pattern of numbness, tingling and pain that usually is worse at night. As the condition worsens, you may lose some hand strength and dexterity. You may experience any or all of these symptoms

No single test can tell for sure if you have carpal tunnel syndrome. Instead, your doctor reviews your medical history and does a physical exam, then may arrange for you to have one or more tests.

During a physical exam for suspected carpal tunnel syndrome, your doctor examines your hands, arms, shoulders and neck. Your doctor may also

During your exam, your doctor may give you the following tests to help diagnose carpal tunnel syndrome:

Phalen’s test.In this test, you place your elbows on the table with arms up. Bend your wrists down as far as you can while pressing the backs of your hands together for 30 to 60 seconds. If you feel tingling or numbness, it may mean that you have carpal tunnel syndrome.

Tinel’s test.Your doctor taps on the median nerve at your wrist. If you feel tingling or a shock-like sensation in the fingers served by the median nerve, you may have carpal tunnel syndrome.

Compression test.For this test, your doctor will apply constant pressure to the median nerve for 30 seconds. If you feel tingling or numbness, you may have carpal tunnel syndrome.

None of the tests above is completely accurate, possibly leading to an incorrect diagnosis – positive or negative. A physical exam doesn’t always provide the answer either. That’s why your doctor may order these additional tests

Ultrasound is a new and alternative way to help determine if you have carpal tunnel syndrome. Its use for this purpose is still being studied and may not be available in your area. Sound waves are bounced off your hand and wrist to create images of nerves, muscles and tendons. Carpal tunnel syndrome can make the median nerve look thinner than normal. Ultrasound can’t test nerve function, though, so it can only suggest a diagnosis.

All traditional treatments for carpal tunnel syndrome attempt to relieve pressure on the median nerve as it passes through the carpal tunnel in your wrist. Which treatment choice you make depends on the following

Treatments for carpal tunnel syndrome fall into two general categories: surgical and nonsurgical. Both have potential risks and benefits.

Nonsurgical treatments include a sequence of options, starting with simple steps you can take, such as activity modification, and moving on to more involved treatments, such as splints and corticosteroid injections.

Most people with carpal tunnel syndrome should at least give nonsurgical treatments a try. These treatments work best if you haven’t lost any hand strength. They might work – saving you the cost of surgery and the discomfort and time away from work that follows surgery. If they don’t work, you’ll know in a few weeks, and you can then have surgery.

Wrist position is key to controlling your carpal tunnel syndrome symptoms. The carpal tunnel is most narrow when your wrist is either bent down or cocked back all the way. It is largest when the wrist is straight. For this reason, changing how you do repetitive hand activities or avoiding those activities altogether can help. The more your wrist is bent, the more pressure is put on your median nerve. To protect your hands, take these precautions

Splints (braces) are the most commonly used nonsurgical treatment for carpal tunnel syndrome. Splints that immobilize the wrist in a neutral (unbent) position are most likely to relieve discomfort. An unbent wrist maximizes the size of the carpal tunnel, which reduces pressure on the median nerve, relieving your symptoms.

You may need to wear a splint for a few days to a week or more before noticing significant improvement. Some studies show that continuous splinting – wearing a splint both day and night – is more effective than wearing it just at night. Others, however, show little or no added benefit from 24-hour splinting, particularly in terms of symptom relief. Also, many people find that a splint restricts their hand and wrist movements too much to be worthwhile at work and around the house, so night wear alone is a good option.

Splints are safe, relatively inexpensive and give many people with carpal tunnel syndrome excellent short-term relief from their symptoms. Besides relieving discomfort, splints can sometimes improve conduction of nerve impulses along the median nerve, which can improve strength, dexterity and sensation.

Splints are most likely to work for you if you’ve had mild to moderate carpal tunnel syndrome symptoms for one year or less. Splints may be a good choice if pregnancy is causing temporary discomfort you can’t tolerate.

During both types of gliding exercises, you maintain each position for seven seconds. Repeat each set of exercises five times, three to five times each day.

These baths can help reduce carpal tunnel swelling. To do this therapy, soak your hand in warm water for five to 10 minutes, then in cold water for one minute, then back and forth between hot and cold. You typically do this twice each day. Contrast baths are often done in combination with gliding exercises to relieve symptoms.

Directing ultrasound waves at the carpal tunnel can be helpful in mild to moderate carpal tunnel syndrome, though results have been mixed. In one study, 20 sessions of therapy during seven weeks significantly relieved discomfort and improved hand function after two weeks, seven weeks and six months. Other studies have shown no benefit.

Drug treatment of carpal tunnel syndrome attempts to reduce any inflammation in the carpal tunnel that might put pressure on the median nerve. These medications are commonly used

NSAIDs. If tendinitis or another inflammatory condition accompanies your carpal tunnel syndrome, you can relieve some of the pain by taking nonsteroidal anti-inflammatory drugs (NSAIDs). These drugs include ibuprofen (Advil, Motrin, others), naproxen sodium (Anaprox, Aleve, others) and aspirin – either prescription or over-the-counter.

NSAIDs are unlikely to relieve your symptoms if inflammation isn’t causing your discomfort – and most people don’t have inflammation around their nerve. NSAIDs do nothing to relieve other carpal tunnel syndrome signs and symptoms, such as tingling, numbness or hand weakness. Even when an inflammatory condition is present, NSAIDs may be most effective when used in combination with splinting, activity modification and gliding exercises. When used in such combination, it’s difficult to know if the NSAIDs are adding to the known benefit of those other treatments. Even nonprescription NSAIDs may cause side effects in some people if taken for a long time. Consult your doctor before taking NSAIDs.

Diuretics.Diuretics are high blood pressure medications sometimes prescribed on the theory that fluid retention in the carpal tunnel can cause pressure on the median nerve. There’s no evidence this is true. Diuretics have undesirable side effects and are rarely used.

Corticosteroid injections may provide significant short-term relief from pain, tingling and numbness. Often, some relief is immediate. Relief then builds over time, often peaking about one month after injection. The length of time an injection is effective varies greatly from several weeks to more than a year. Relief may last longer if your carpal tunnel syndrome symptoms are mild to moderate at the time of injection.

For most people with carpal tunnel syndrome, doctors try nonsurgical treatments before opting for surgery. However, the decision is a personal one influenced by the cause and severity of your symptoms and your feelings about surgery. When deciding whether to try nonsurgical options or skip them, keep these points in mind